by Staff / Wednesday, 05 May 2010 / Published in Recording Technology

Recording studios have already taken a hit from home & mobile recording technology. Will the iPad join the fray?

There’s no doubt that digital recording has completely changed the face of music production worldwide. Recorded music used to be the exclusive domain of professional recording studios from the day that Thomas Edison recorded his first cylinder.

But times have changed, and they’ve changed quickly – even in only the past decade. I recall the novelty of my friend’s Tascam 4-track cassette recorder, which allowed us to make rehearsal room records that were only slightly better than popping a cassette in your boombox and pressing the record button. For us, the invention of the CD-R was a big thing.

Nowadays, not only has desktop recording become a reality, but digital mobile recording is also a technology commonly used by gigging bands, journalists, and virtually anybody else who needs to record high-quality audio on the go.

Will One Apple Spoil the Bunch?

As if it wasn’t enough that Apple came to dominate the online music market with iTunes and its iPod, the company has taken its mobile technology to the next level by allowing pro audio companies to harness the iPod for mobile, multi-track recording. From Numark’s iDJ Mixing Console for iPod to the Belkin TuneStudio Audio Mixer for iPod, the iPod can now interface with a multitude of different gadgets at different price points for a wide range of recording and performing settings.

Studio Trach is perhaps the most interesting app for recording, as it offers true multitrack recording for the iPad. In addition to being able to record 8 tracks simultaneously, Studio Trach also offers a respectable effects rack for each channel, a metronome, and most ingenious, Wi-Fi syncing that allows you to import and export tracks wirelessly. The app can utilize the iPad’s integrated mic and headphones, but in order to take advantage of multi-track recording, you need to interface with a multi-input hardware and, because iPad technology is quite new, the verdict is still out on how reliable this interface truly is.

Another interesting music production app for the iPad is the Retronyms Synth. This iPad-driven app is a polyphonic synthesizer that can be operated via the touch screen or with a MIDI keyboard. Like similar soft instruments for desktop recording, Retronyms Synth offers more than 40 integrated instruments, a modulation wheel, and five dynamic control knobs. The small, touch-sensitive keyboard is limited in scope, but features five octave buttons, which allows you to jump between octaves quickly. The Retronyms synth offers musicians a fun yet versatile soft synth to play around with on the road, but it can also record directly to Logic or Garageband via an auxiliary cable as well.

But what might make the iPad a particularly attractive mobile recording device is its ergonomics. While the iPod has been used to interface with music production hardware, for the most part, it serves as nothing more than a kind of portable hard drive; the device that it interfaces with does most of the work. With the iPad, the large, dynamic touch screen gives musicians and producers the chance to use the device itself as a DAW, taking the place of a laptop or desktop computer.

Because the iPad has revolutionized the way users can use gestures to fluidly work, communicate, and surf the web, this way of traversing the digital world is most certainly bound to make an impact on the digital recording age. 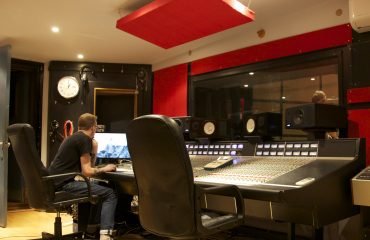