When Rumours entered the studio in order to rehearse for their first show on the new year at Archspace, Shorditch we could hear a faint sound through the soundproofed doors of something that sounded truly brilliant! We at Resident couldn’t help but chat to them when they broke for lunch to find out more about them and where they plan on taking their music in the foreseeable future.

Rumours are an electronic-pop trio consisting made up of Mark Borgazzi, Federico Bigonzetti and Marion Solheim. Mark & Fede grew up together as teens in Italy, whilst Marion grew up in Finland and formed their group whilst studying together at BIMM University.

The success on their debut EP ‘Shapes’ released last year led them to play shows such as Sofar London and London KoKo, which are incredible feats! Mark told us that for the next year they are planning on keeping an album release or another EP release on hold and just concentrate on gigging and bringing out a string of new singles as the hype around them grows.

We are super excited for the future of ‘Rumours’ and really encourage you to check out their debut EP and check them out at an upcoming show! 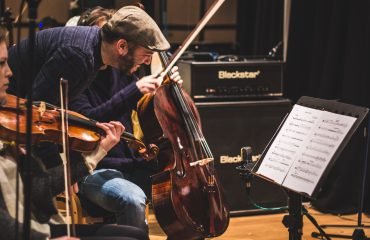