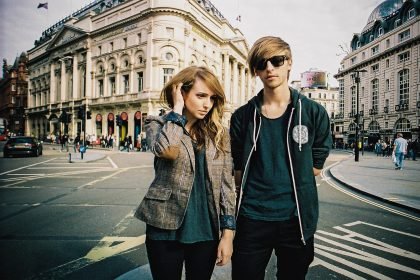 We are pretty familiar with Focusrite, we have a couple of their beautiful pre-amps installed in our flagship Recording Studio A that help with the stunning quality recordings we’re able to produce. So when they called to block out a day in Studio 1 to film promotional material for a new portable product we were more than happy to accommodate, even more so because they were bringing London rock duo Anavae with them to perform and record using the brand new, yet to be released Focusrite gear.

The duo –  Rebecca and Jamie – (with supporting band) have released a succession of EPs, each seeing the fan-base successively growing rapidly in size and enthusiasm. It’s not hard to see why. Their songs draw easy comparisons with stadium filling groups like Paramore and even Bring Me The Horizon and with a debut full length -‘Dimensions’ – released at the end of last year, 2014 is shaping up to be an exciting year for them.

We are extremely excited to play a part of Focusrite’s new releases and work with more great artists.