Looking for a recording studio that can produce that big sound for you? Find one with two rooms.

If you’re an avid Beatles fan, then you know that things began to unravel for the group during the production of The White Album. Due to Ringo’s brief departure from the band, bruised egos, and a chaotic recording schedule, to this day, the recording credits for songs like “Back in the U.S.S.R.,” “Dear Prudence,” and others remain disputed. It is, of course, the chaos of The White Album’s production approach in the recording studio that led to such an expansive universe of songs; as John and Paul duelled as songwriters, the result was a virtual “big bang” of songs. Practically every shade of pop song was created in that tumultuous recording session.

Although The Beatles left the White Album recording sessions with fresh wounds that led to their demise, George’s reflections about the time spent in the recording studio on that session are revealing. In the video version of The Beatles’ Anthology, he speaks fondly of how busy the band was at Abbey Road, utilizing two of the studio’s live rooms simultaneously to keep the production schedule and creativity flowing.

“It all depends on the kind of record you’re looking to make”While the bulk of the instrumental tracks on The White Album were performed by the Beatles, the album does feature a fair share of strings, horns, and most notably, Eric Clapton’s lead guitar track on “While My Guitar Gently Weeps.” Although The White Album eventually ushered in the Beatles’ first use of an 8-track recorder, the first half of the recording sessions were recorded on 4-track decks. George loved the flexibility of using both Studios 1 and 2 at Abbey Road, with Clapton or the horn players in the smaller room while the other three players were in the main room recording the principal rhythm tracks for new songs. In spite of the tension, George sensed the productivity of an Abbey Road humming with activity, and it most certainly contributed to his lush, Phil Spector-led production of his solo debut, All Things Must Pass, in 1970.

It’s easy to imagine that the days of investing in sprawling recording studio resources are no longer necessary, now that the digital recording age has ushered in soft instruments, digital editing, sampling, and a multitude of other newfangled technology. Why, therefore, would a musician or band need two recording studio live rooms for one session?

It all depends on the kind of record you’re looking to make.

When I recorded my debut solo record in 2001, I went into the studio with a sizable recording budget, a collection of songs, and very little idea of how to produce and arrange them. I brought in a highly creative producer/engineer as well as a good friend with formal music training. The recording studio was a huge, magical, world-class facility with a mix of vintage and current gear as well as two separate studios.

After getting the acoustic guitar and vocal tracks finished, the remaining work was all gingerbread: we had a cavalcade of musicians coming in each day to contribute to the tracks. It was here that having two studios available at the time proved to be a real time-saver.

While the producer slaved over drum tracks in the big studio, crafting the right sound and getting the best takes possible (a laborious process to say the least), my friend and I were free to record a professional string quartet, vibraphone, a percussion ensemble, as well as other instruments that he and I could manage. The studio’s in-house engineer set up mics and pushed the faders for us in the smaller studio as we layered track after track of supporting material onto the bare bones of my songs.

In the end, the producer had an incredible amount of recorded material to use in crafting the final tracks. Because the arrangements were so lush, he was free to sculpt complex arrangements where vibraphone, piano, and 12-strong electric guitar gave way to soaring strings, orchestral bass drum rumbles, and synth textures. The two-studio approach truly enriched the recording session and contributed to a finished product that I am still proud of to this day.

Two For the Price of One?

Truth be told, recording studios have varying reasons for offering multiple rooms, and the primary reason isn’t usually that they want to offer both of them to the same client during the same recording session. A smaller recording studio may be priced lower to attract bands or musicians looking to do a quick demo, while other rooms may be largely for mixing and editing.

Depending on your budget, in some cases you may be able to find a recording studio that is willing to block out both of their rooms for a few days for the same price you’d pay for an over-hyped boutique studio. Or, if in the middle of a session you feel you could use the extra facilities, the studio may be more than happy to give you their vacant recording studio at a fraction of the regular price.

This was the case for me: the other room was empty, and the studio owner was happy to double as my engineer for a few days to make a bit more money on the project. While at first it seemed crazy, in the end it saved the record label money, since we were able to get all of the session players recorded in a timely manner that still allowed us to experiment with different ideas and arrangements.

Certainly, if you’re a band that has 99% of your arrangements worked out before you ever decide to record, then a single recording studio makes the most sense for you. But if you’re looking for the Abbey Road experience, where iconic sounds are created in the sphere of the studio, then having two tape decks spinning at once may give you the results you’re looking for. 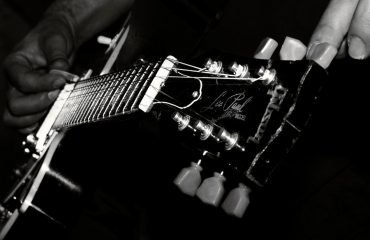 What to Prepare Before Entering the Studio: Guitarist Edition

In the studio with… Natasha Bobbe